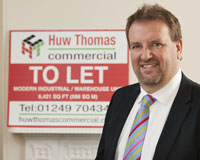 Whatever the issue he is sure he can help; why not contact him.

Originating from Merthyr Tydfil in South Wales; Huw Thomas graduated from Bristol Polytechnic (now University of the West of England) with a Diploma in Valuation and Estate Management in 1987.

In late 1989, Huw moved with Dreweatt Neate to set up a new Commercial Department for the company in Chippenham dealing with all aspects of commercial property in Wiltshire and the surrounding area.

In 1998, Huw joined King Sturge in Bath becoming a Partner in 2007; then a Director in Jones Lang LaSalle when the firms merged in 2011. During this time Huw dealt with the full range of commercial properties.

He has undertaken a number of major charity events including completing the London Marathon for Round Table Children’s Wish and completing the Three Peaks Challenge twice for the Meningitis Trust.

In and around Chippenham, Huw can often be found with a pint of real ale in the Three Crowns!